A View From The Pew 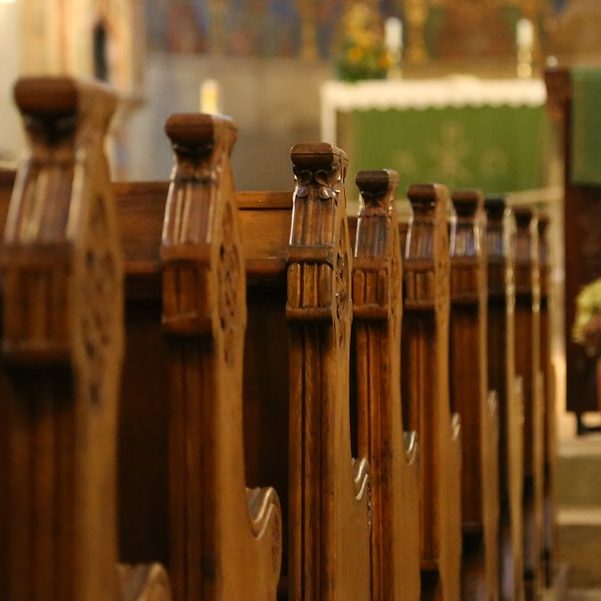 A man is sitting in church between his wife and young son. All three are holding hands. It feels good to be in the house of worship, together, with their child. They’ve left the cares of the marriage and the world outside and have entered a different world, a sanctuary: the hushed tones of the organ as the minister prays… the ritual order of service… the light coming through the stained-glass… the choir… listening to God’s very Word… A sanctuary from—In this man’s case, a hoped-for sanctuary from the self.

But alas, the man has brought his self with him, though he made a valiant effort to keep part of it outside this house of God. Holding hands with wife and child in the very temple of God would surely certify that resolve. They’ve just recited the Apostles’ Creed and prayed the Lord’s prayer, and suddenly, there it is! Just a glimpse out of the corner of his eye. The hair tossed with a quick glance over the shoulder, temptingly trying to connect with someone’s radar. The subtle body language. His radar, always scanning, connects. Fear strikes in an instant, for he knows he has to drink. And drink he does, taking a quick snatch.

The wife feels a stab of pain and quickly suppresses it. Consciously she denies she even saw it; subconsciously, she knows, and dies a thousand deaths. It’s been eating at her insides ever since she began dating her husband-to-be. But she’s in denial too. The problem does not exist. It cannot exist.

The eight-year-old son catches the flare of the lust-snatch. He turns to see what force has captured his father so, and it indelibly registers that there’s something very powerful going on here between his father and that image. Imprinting. In the son! “The sins of the fathers…”

… What this man brought with him to the service, along with his wife and child, is what increasing numbers of religious carry secretly inside themselves all the time—a lusting heart. Whatever else he may be, this upstanding-appearing male is unwittingly, while singing that lofty hymn and taking the Holy Communion, engaged in the unholy communion of lust and false worship.

Notice that his belief system does not save, but actually helps cover up his problem. His religious system has intensified a law of moral commandments he cannot keep, and has become a curse. And all his believing in God isn’t helping him one bit. As a matter of fact, his belief system—that’s what it is, a system, and System shuts Life out—helps keep him under the curse of that very law. For this man, ostensibly worshiping God, is in fact an idolater, doing obeisance to the spirit of Lust.