Going Round In Circles 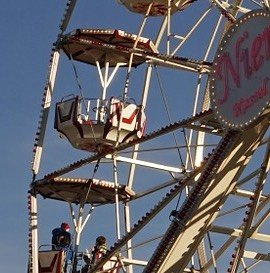 I knew I had a problem but didn’t know what it was or what to do about it. Then one day I got shown the “cycle of addiction”: I do something I deeply regret; I feel pain and promise myself “never again”; at some point, however, the pain passes and I do the very thing I promised I wouldn’t; I deeply regret it. The cycle continues. The pattern is set. I keep thinking I need to try harder, but nothing breaks the cycle. In fact, for years and years I didn’t even realize that there was a cycle repeating itself over and over. It never occurred to me that I could be hooked, powerless to stop. But I was. And I was too ashamed to tell anyone.

After I got shown that cycle of addiction, a friend suggested that I attend a program for sexual recovery. That soon led to SA. I also saw a therapist. At SA I went to meetings. I got a sponsor. I tried to 90 meetings in 90 days. I got introduced to the 12 steps. Steps 1, 2 and 3 were key: first, I can’t; second, God can; third, I think I’ll let him.

I believed that could save myself but the evidence said otherwise. I met other people in a safe environment. Others also had similar struggles. I began to accept that I could not save myself, that I needed help. I went to meetings because I wanted to recover but needed help from others. I really was powerless. Step one.

Next, did I believe in a higher power? Yes. But did I really put my trust in him? I realized – slowly – that God had been with me all along, loving me and helping me, despite myself. I could trust him. Step two.

Slowly, I learned to hand over my problems and temptations to God. “God, please take this struggle from me; I’m powerless over it.” I learned, slowly, to stop trying to control things and to bring God in. My higher power could save me and gradually I was reaching out to him – and to others in the program – for help. By taking action I was deciding to turn my will and life over to my higher power. Step three.

And so it continued. I grew. I learned to trust others. I met men – brothers – who walked with me, encouraged me, and provided an example. Some fell. Many kept on. Nearly five years later, my journey continues.

The fruits of recovery have been abundant. In short, I have my life back. I have love for myself and others. I can receive the love of others. I live in the light. Much of my shame has lifted.

Yet I must be vigilant. This addiction kills. It is cunning, baffling, and powerful. I continue to work the steps and attend meetings. I call my sponsor and others. SA is a program of recovery. I’m deeply grateful to the program and to the people in it for the recovery and life it has given me.