Sex addiction can be devastating.  But what does that devastation look like? With Hurricane Harvey in the news the last couple of weeks, a member quoted this from Alcoholics Anonymous:

The alcoholic is like a tornado roaring his way through the lives of others. Hearts are broken. Sweet relationships are dead. Affections have been uprooted. Selfish and inconsiderate habits have kept the home in turmoil. We feel a man is unthinking when he says that sobriety is enough. He is like the farmer who came up out of his cyclone cellar to find his home ruined. To his wife, he remarked, “Don’t see anything the matter here, Ma. Ain’t it grand the wind stopped blowin’?’’ (p. 82, Into Action)

The Extent of Destruction in Sex Addiction

I love Bill W’s picturesque descriptions of the problem of addiction, and even more so the pictures he draws of the life in recovery. A truly horrifying picture on the one hand and wonderfully joyous on the other.

But I think he could have done better with this particular one. He’s describing well enough the long term effects that an addiction has on a family system, but I think he’s chosen the wrong villain: the tornado.

A tornado certainly brings complete devastation and requires months of work to clean up and restore afterward, but a tornado is limited in the damage it can do. It’s like a surgical strike in warfare. Lock on the target, done.

Living here in the midwest, I’m no stranger to the destruction of tornados. Joplin Missouri was very recently devastated by one. But I’m from the Gulf Coast originally, and so I’ve experienced a number of hurricanes.  Harvey is perched on top of my home town as we speak.  And having experienced both, and being a sex addict with decades of suffering, I would say that the image of the hurricane better resonates with me than the tornado.

The hurricane moves slowly across the ocean. You see it coming. (The tornado is upon you before you know it, you hardly have time to dive into the cellar before it tears your roof off.) You know it’s going to mean trouble, but you’re not quite sure where the trouble will hit, but it’s likely to be bad. And you convince yourself that you’ll be able to dodge it this time.  It will land somewhere else.

My addiction is like that.  Or I’m like that. The destruction is headed in my general direction, but it might not get me this time. Maybe other addicts (poor saps), but not me. But then it does. And like Harvey, it rolls over me slowly, crushing, and then it’s back out to sea to gain new strength and come back for part 2.

The hurricane is slow moving and it covers vast spaces. A tornado torments a town or two. The hurricane pounds whole regions of a country. Multiple states. Swamping tiny islands before it even gets to the mainland.

I should mention that with a hurricane, you get the worst of both worlds. You get not only the slow moving hurricane monster, but often you get the burst of destructive tornado energy as well. One report from a couple days ago said that with Harvey, there had been 16 confirmed tornado sightings and 64 warnings. The addict sees the slow erosion of his quality of life, punctuated by quick strikes that take out his or her family (discovery) or job (caught) or freedom (arrested).

When will it stop?

Rebuilding After the Strom

But there is a solution! With a hurricane, you hunker down and it passes and you start rebuilding. With sex/relationship/pornography/lust addiction, hunkering down and waiting it out doesn’t work. The addiction is the never ending hurricane in your life. The eye may be calm, but it will pass. You know it will. How many times has the calm been replaced by the howling, tree-uprooting wind and the deluging down pour? You need a an evacuation route. 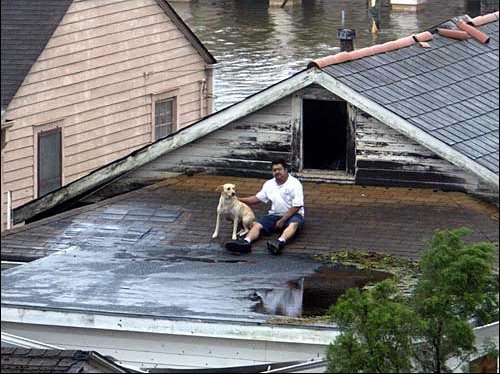 My own evacuation route was a path of 12 simple steps. I found in the fellowship of Sexaholics Anonymous the 12 steps of recovery and the support I needed to follow them out of the storm. I needed that support too.  The steps are simple in that they are not complex. But they do require hard, determined work. And for that I needed more than the perpetual lashing of the storm from behind. I needed someone(s) to pull me off the roof and into the boat.

You’re probably reading this because you’ve been flooded once again. You’re sitting on your roof, thinking of the mold and rot that’s waiting for you once the waters recede. How many more storms are you going to endure? Consider this article an invitation to get in the rescue boat of Sexaholics Anonymous and to come in from out of the rain. Give us a call, and join us for a meeting.